I don’t usually eat out. When the opportunity arose, with two friends who have lived out of Dublin for more than a few years, I went to twitter for help.

‘Dublin twitter foodies. I’m looking for a suggestion for a reasonably priced restaurant in the city centre. @Tweetinggoddess @darraghdoyle‘

Before I list every recommendation I will tell you (briefly) why I chose Avenue.

A) Avenue was recommended by Darragh Doyle and they instantly responded from their twitter account with their menu!

B) I had actually been there once before for lunch.

I am not suddenly going to turn into a food blogger and demand free meals from anyone in return for words on the internet but I did visit Avenue with my friends and had a lovely early bird meal. I recommend the Pressed Pork for starter and the Onglet I had for my main course.

Thanks to Alanna Feeney for her twitter interaction and the hosting on the night and to Nick Munier for the food!

for replying to my tweet with the following recommendations.

And @YamamoriDublin which appeared in two separate recommendations.

From Boston to Siberia With Some Guinness

I was sitting in the Robert Reade  one Monday and enjoying a surprisingly filling Caesar Salad they had on the starter menu while reading the Irish Times when I saw that very interesting front page story about the Chess Trophy that had been gathering dust in Weirs Jewellers for fifty years waiting for it’s owner to claim it.

It is funny how something can trigger your memory.

Suddenly I am back in 1992 working in Doubleday Bookshop, Faneuil Hall, Boston.  A generously proportioned man with ginger hair and beard walks in talking loudly to another man who looks around the bookshop in silent apology. I greet him, as I was taught, in true U.S. Customer Service manner, he recognises my Irish accent (or at least he realises it is not American and the truth is quickly out).

He starts to ask me about how popular chess is in Ireland and I tell him my Dad taught me how to play when I was seven but I have only played casually since. I am taken a back that he is genuinely bubbling with excitement while his friend seems to be searching around for a place to hide among the books. He asks me about a name from the Chess world I had heard my Dad speak of in a revered tone as he poured over the Irish Times Chess move of the day, the well known Bobby Fischer. The man asks me if Irish people talk about him. Again I have to tell him that the only person I really talked about Chess with was my father and yes, I do remember my Dad saying that he was a brilliant American Chess player in the seventies who then became a recluse.

At this point his friend dragged him away but soon they were back with books to buy. The man continued his line of questioning about Bobby Fischer and trying my best to not sound rude I told him again about my father and chess. He gave me his credit card and as I compared his signature with the silver writing on the cars which sparkled in the Bostonian afternoon sun I read the name  was the name Robert Fischer. I was stunned into an awkward silence and he waited patiently with a big grin on his face.

To this day I am still not sure whether he was the real Bobby Fischer or just a namesake as the Chess player left the U.S. that year and never returned, maybe he flew out of Boston and was buying a book for the plane.

Stephen King came in a few days later, he cut a large and silent presence in the shop and when he suddenly loomed across the counter he made me jump out of my skin.

Back at home my Dad was proud to hear that he had been discussed by Bobby Fischer.

Within a year I had finished college and won a Guinness/EarthWatch Essay competition that saw me fly to Siberia and take part in an expedition to Preserve Lake Baikal.  Now that was quite an adventure, five days on a boat and four days in a basic cabin collecting and testing animal life for pollution that was creeping into the worlds largest (by volume) freshwater lake. It felt good to be part of an environmental project. We sent our findings to the Russian Government but they refused to do anything about their country’s lake which holds 20% of the world’s fresh water supply. In recent years the pollution has increased to dangerous levels thus affecting the 200 indigenous types of flora and fauna.

When I returned to Dublin I wrote a four page report on the expedition and met the MD of Guinness for lunch where Kevin Myers was also in attendance. He later on mentioned me in the Irishman’s Diary.

But enough about me.

The Harp has been a symbol of Ireland since the 14th Century and in 1759 (long before they sponsored me) Guinness adopted the harp as the logo for the now famous stout but they reversed the harp on their pint.

Jumping to 1921 whenIrelandwas officially recognised as a nation they wanted the same reversed harp for the emblem of our country.  By that time Guinness were too attached to their logo and they refused to hand over the patent. Or so a guide in the Guinness Hop Store told me once.

That is why it their  harp logo is like this… 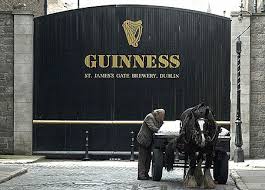 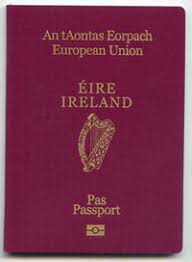