My full name is Benjamin Andrew Michael Moore (beanmimo geddit?).  Most people call me Ben, though I have been called worse.

I was very lucky that my parents chose to live in the sleepy village of Dalkey in south county Dublin, Ireland.

My Father and the view he chose for our family.

My Father was an architect by profession and an artist at heart. He dabbled in pencil drawings and sculpture. My Mother infused me with her love of literature and movies.

I am the youngest of four. My eldest Brother is an entrepreneur, my Sister an Author and a University Lecturer and my next Brother a Restaurant Manager.

In the beginning I remember reading the Peanuts books by Charles M. Schultz, the Adventures of Asterix and Tintin. The first sort of science fiction books I read were the Professor Branestawm novels by Norman Hunter. My taste for literature was varied. I galloped though many Dick Francis stories and found adventure in Desmond Bagley but more importantly J.R.R. Tolkien opened me to the important themes of honour and chivalry. When I was not reading I would stay up past my bedtime feasting my eyes on as many movies as I could.

When I had finished my homework (and sometimes before) you could find me scribbling stories into my copybooks.

I tried to follow in my father’s footsteps and took up mechanical drawing in school but found I couldn’t draw a straight line with a ruler and a pencil. He thanked me for the effort and told me that he would be happier if I found my own passion.

I completed an Arts Degree in English Literature and Greek and Roman Civilisation (or as I sometimes call it a Degree in English & Asterix and Obelix). When I was not engaging with classical philosophical works or losing myself in stories and timeless characters, I wrote for University College Dublin’s independent student newspaper The College Tribune which despite my 20 year absence is still going strong.

Straight after college I used my writing skills to win an Guinness/Earthwatch trip to Siberia and wrote a report about it for the Organisation.

Despite that I did not have the confidence yet to pursue a career in writing but I easily landed a number of customer service roles in bookshops before returning to study at University of Limerick where I completed a Post Graduate Degree in Business Administration. For the year I was handed a column in UL’s Student paper An Focal.

After a short stint in the FMCG sector selling mobile phones and various accessories I landed my most worthwhile job in ISME, the Irish Small and Medium Enterprises Association where I helped increase the membership that gives valuable information to the tough world of SME’s in Ireland.

All the while I was writing away.

I co-wrote and acted in a play of three performances, a light hearted historical tour of Dalkey.  I managed to get published by writing some film reviews.

I continued starting stories and never getting to the end of a first draft until I took a screen writing course in Filmbase where I managed to finish a Romantic Comedy script about the accidental swapping of mobile phones which brings a pair of lovers together. Though this never got past my first draft or even close to being made, it was a relative milestone in my hobby.

Soon after a group of us from the class put our heads together and managed to win a commission from our national broadcaster to write a comedy. We were paid for our proposal but, unfortunately, due to sudden budget cuts our idea fell by the wayside.

So far my most enjoyable writing achievement has been as part of a film review website called The Four Word Film Review where I have been a member since 2005 and have been a regular contributor to the film review site. In 2010 our reviews found there way into a book! 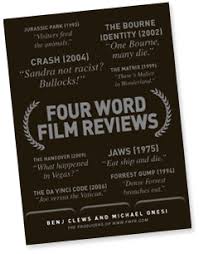 These ups and downs in my life were reflected in the Irish economy and my time in ISME drew to a close.

Then I entered the wilderness years as Ireland’s commercial sector moulted employees. Many secure jobs during Ireland’s Celtic Tiger years just vanished and were replaced by worried families, empty bank accounts and crippling mortgages. It was the first time in my life that being childless and single was an advantage to me. At least I had only myself to maintain.

I applied for job after job and the rejections came mostly in the form of silence.

Then I put all the experience I had gained over my years of employment and writing on the table and planted two ideas into the ground.

I became self employed in February 2012.

My blog posts range from film, book and culture reviews, film quizzes and history to what ever happens to cross my mind.

I hope you will enjoy.

20 responses to “About Ben”