A few generations from now the Earth’s soil is losing the ability to grow enough food to sustain the Human Race. A slim chance for survival rests in a space trip to another galaxy for a group of brave scientists piloted by Cooper (Matthew McConaughey).

The words ‘spectacle’ or ‘epic’ are not used lightly when talking about many of director Christopher Nolan’s films. He burst onto the scene with his second feature “Memento” and then seduced us with his Batman trilogy and delightfully confused us  with “The Prestige” and “Inception”.

Through these films he has explored memory loss, time lapsing dreams, magicians, and the nocturnal crime fighting habits of a deeply disturbed millionaire and all with a sweep of a cape embedded with a grand style and neatly stitched with misdirection.

With “Interstellar” Nolan revisits many of these themes and creates an atmosphere we last saw in Spielberg’s “Close Encounters of a Third Kind” while borrowing from a Twilight Zone episode which deals with what the effects of Interstellar space travel may have on humans. The first hour and half is well-crafted. We are drawn into the world of pilot-turned-farmer-Cooper, his family, in particular the relationship with his daughter Murph and the plans to save the Human race from a crumbling Earth. Once his incredible journey had begun Nolan asks the audience to make a number of small leaps of faith. They are just about forgivable because we are hooked. 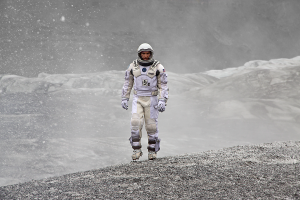 McConaughey is still playing his usual role (I confess to not having seen his Oscar winning turn in the Dallas Buyers club yet) and it fits in here as the suave and commanding pilot turned family man.  Anne Hathaway is perfectly sharp as the physicist who accompanies his on the journey. Michael Caine gives a grandfatherly performance as Hathaway’s father (also a physicist). There is a lovely injection of comic relief delivered by the clever artificially intelligent mechatronic robots who lumber about with their own peculiar and charming style.

It is long and it is as sentimental as his Batman trilogy was stirring. There are passages of dialogue in the second half of the film that are almost unnaturally verbose especially when dealing with the themes of love versus science and survival. Romantic love is not a theme that Nolan seems to gravitate toward and instead he pours all of his sentimentality on the relationship between Cooper and his daughter and does not spill one drop. 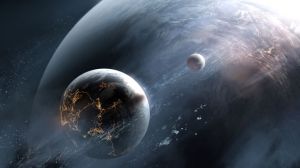 There are breathtaking moments and some nice little plot diversions that will pique your attention. While the graphics are incredibly stunning, making the film a visual feast, it is the final, and massive, leap of faith makes the film good but not great science fiction and yet still very enjoyable.

As with “Memento” and “Inception” he uses an innovative Time device in the plot like a vendor infuses a whipped ice cream with a delicious syrupy sauce.

If you can watch it in a screen like the Omniplex MAXX in Rathmines!

Interstellar is in Irish cinemas now.