Isaac Asimov was a literary hurdle I managed to avoid for a couple of decades and looking back  I do not know why. 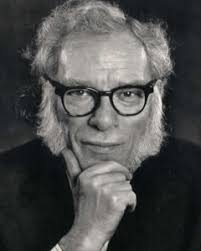 Science Fiction and Me

I read the Lord of the Rings trilogy twice and then the Chronicles of Thomas Covenant once (that was enough), Philip K Dick, Arthur C. Clarke, Stephen Baxter and a smattering of other fantasy and science fiction writers.

Whenever I told sci-fi fans about my ideas for stories many of them asked if I had read Isaac Asimov. Until a few years ago the answer was “No”, then I picked up a second hand copy of Foundation.

Within three pages my imagination was knocked out, tied up and thrown into the back of a spaceship. I devoured five of the seven Foundation books in less than two months and then dined on three of his Robot short story compilations.

Before I run through his brief biography (because a full one has already filled two volumes) I will give you an example of his influence.

The American company called U.S. Robotics founded in 1976  and sells high speed modems which fuel internet access was named after “the greatest company in the known galaxy” U.S. Robots and Mechanical Men, from Asimov’s novel I, Robot (1950).

Asimov created the now famous three laws of Robotics which bind most of the robots involved in his stories. I’ll let him explain them to you.

A Brief History of Isaac Asimov

Born in Russia in 1920, his parents moved to Brooklyn when he was three years old. His high functioning memory helped him finish high school at the age of sixteen.

His father wanted him to study medicine but instead he pursued chemistry in Columbia University and after a brief stint in the army he graduated with a doctorate in 1949.

Asimov went on to teach in Boston University’s School of medicine and by 1955 became associate Professor of Chemistry. But by that time he had been a published science fiction writer for 16 years and the pressures of both careers were beginning to show.Asimov retired to be a full time writer in 1958 but still kept links to the University.

His first short story Marooned off Vesta was published in Amazing Stories in 1939, he was only nineteen. Then his stories began to appear in the leading science fiction magazines.

By the end of his career he had published over 500 works including mystery novels, a four volume History of North America, a two-volume Guide to the Bible, a biographical dictionary, encyclopaedias, books on many aspects of science and a two volume autobiography.

He won the Hugo Award four times and the Nebula Award once.

He is most remembered for the Foundation and Robot series of stories.  He eventually wove the two ideas into single a history detailing the rise and fall of a futuristic Galactic Empire. The original Foundation trilogy begins thousands of years from now when humans have developed intergalactic space travel and colonised thousands upon thousands of planets while the memory and location of Earth has become the stuff of myth and legend. Without ruining it for you the story concerns the crumbling of the Galactic Empire and the work of one man, Hari Seldon.

In the first couple of chapters we meet Seldon as an elderly man. He has devoted his life’s work to a science he created himself called Psychohistory (a mixture of history, sociology, and mathematical statistics). He foretells the collapse of the Galactic Empire and, by doing so, has been named public enemy number one by the said Empire.

He says that without a plan the galaxy will fall into thirty thousand years of barbarism before rising again in any shape or form. His plan will cut this down into a thousand years. If all goes correctly a ‘Foundation’ set up at the edge of the Galaxy which will be the seed of the next empire.

This is all explained in the first couple of chapters of the first book. The story is  divided up into short periods of turmoil in the life of the Foundation, divided by jumps of fifty to a hundred years. We see the empire crumbling and the plan stumbles with fits and starts. Each generation of the Foundation interpret Seldon’s  plan as their current events dictate, wondering if they have made the right decisions. Battles are fought, deals are struck and heroes emerge and soon become part of the Foundations history. All the while Seldon’s plan trundles along in the background.

Fans of Star Wars, Star Trek and the Hitchhiker’s Guide to the Galaxy all have Asimov to thank for part inspiration.

Psychohistory is an actual science though many are sceptical about its usefulness. Asimov makes its application on a much grander scale than it is used today.

Here is a discussion from 2011 where people are discussing whether Asimov’s view of Psychohistory could be put into practice in business.

Asimov did not create the idea of a robot, you can look to eastern Europe for mythical mentions of the Golem, nor was he the first twentieth century writer to use them in fiction, Karel Čapek in his science fiction play R.U.R. (Rossum’s Universal Robots) 1921 was the first writer to coin the term. Karel Čapek may have put robots on the literary map but Asimov was the writer who told everybody where they were.

He did not just write about sentient humanoid shaped robots like the familiar ones from I, Robot. His short stories run the range of cars with artificial intelligence, robot dogs, minds transplanted from our bodies into machines and massive computers able to answer the ultimate question of life the universe and everything.

As the years went on he weaved this rise of mechanical men and robot psychologists into the prehistory of the Foundation stories. In this part of Earth’s future Asimov has created a world where robots are now employed as manual labourers in areas too dangerous for humans to operate.

In these stories conflicts arise when people treat the robots badly and misplaced words like “Get lost” can have bad affects on a purely logical brain of a robot. More issues arise when robots are asked to perform acts that conflict with the Three Laws of Robotics.

Asimov thought up some very clever situations which challenged his human characters to work out the odd behaviour of his robots. They come across like forms of science fiction detective stories.

It is undeniable that his imagination has had a massive influence on science fiction today but some have criticised his writing because of it’s cheesy dialogue and under developed characters.

While this is to a large extent true you must remember he was writing for the new teenage science fiction audience. With the massive scope of his ideas it seems logical that his style should be more than accessible to gain the widest of audiences.

Here are a couple of blogs I read while researching Isaac Asimov.

For a full list of his works and more about him you can check out Isaac Asimov Online.